The following materials are designed to assist project managers and others leading trainings and workshops. However, this material is also suitable for individuals interested in learning how to validate OSM data in JOSM.

Other contributors may have edited the same features as you in JOSM. Alternatively, different data may have been collected in the field for the same features. Both situations cause data conflicts during the upload process. Therefore, it is critical for digitizers to learn about data conflicts in OpenStreetMap, conflict types, and how to fix them using JOSM.

This section features a selection of resources targeted at project managers, trainers, or even self-learners on the topic(s) outlined above.

The following section is designed to serve as self-paced material that can be used both during trainings, and by self-guided learners.

While uploading your edits in JOSM (learn more about this in 2.4 Editing with iD and JOSM), you might have received a message like this:

This indicates a data conflict in OSM. A conflict has occurred because you have been editing the same data/object(s) as another contributor simultaneously. Thus, the other contributor has uploaded their changes first and they have been received by the OSM Server. You are attempting to upload the same data/object(s) with your own changes. Therefore, your changes are automatically rejected by the server because it causes confusion.

You will come across data conflicts in JOSM when you are editing, adding, or deleting objects which are being worked on by another contributor. The other contributor has uploaded their changes slightly before you. Therefore, when you try to upload your changes, it causes confusion for the OSM Server because it does not know which changes are correct. If this happens, the data conflict must be fixed before you upload your changes. 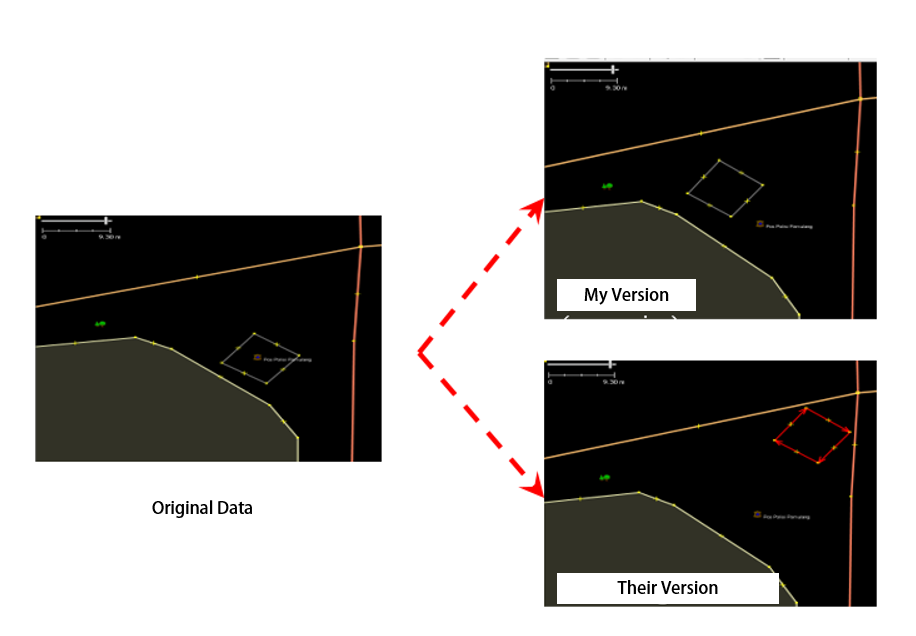 The image above illustrates a potential conflict stemming from the different positioning of the rectangular object in My version and Their version (which has already been received by the server). To resolve this conflict, you have to choose either ‘My Version’ or ‘Their Version’ (see section 3. Fixing Data Conflicts in JOSM).

2. Types of Data Conflict in JOSM

A conflict of properties occurs when an object has been moved or deleted and one or more of its nodes is in a different location than the other version. 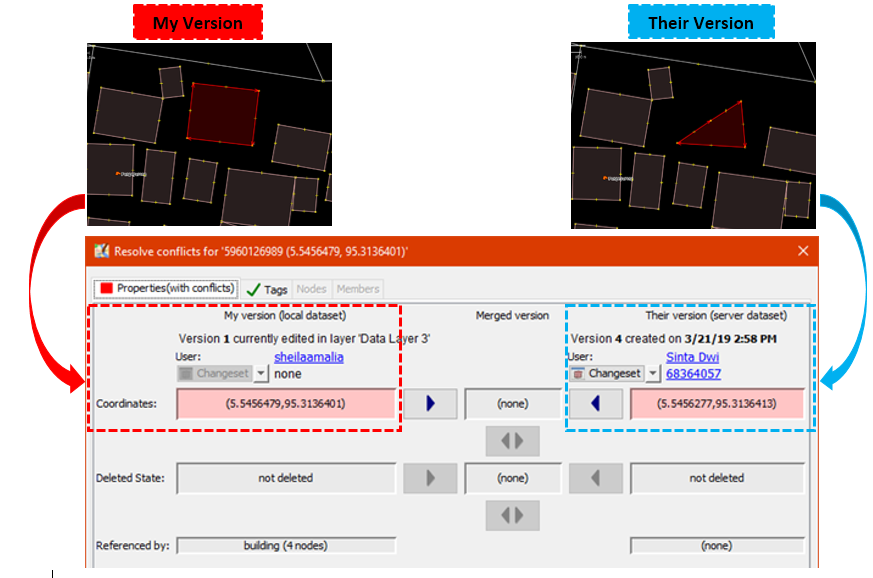 The image above illustrates a conflict of properties in JOSM. In My version the object is square and in Their version a corner nodes has been deleted. To fix this, you need to choose which version is correct.

A conflict of tags occurs when different tags have been assigned to the same object by multiple contributors. The tag can be deleted or changed to the other version.

A conflict of nodes occurs when there are differences in the direction of a way or if nodes in a way have been deleted or moved. 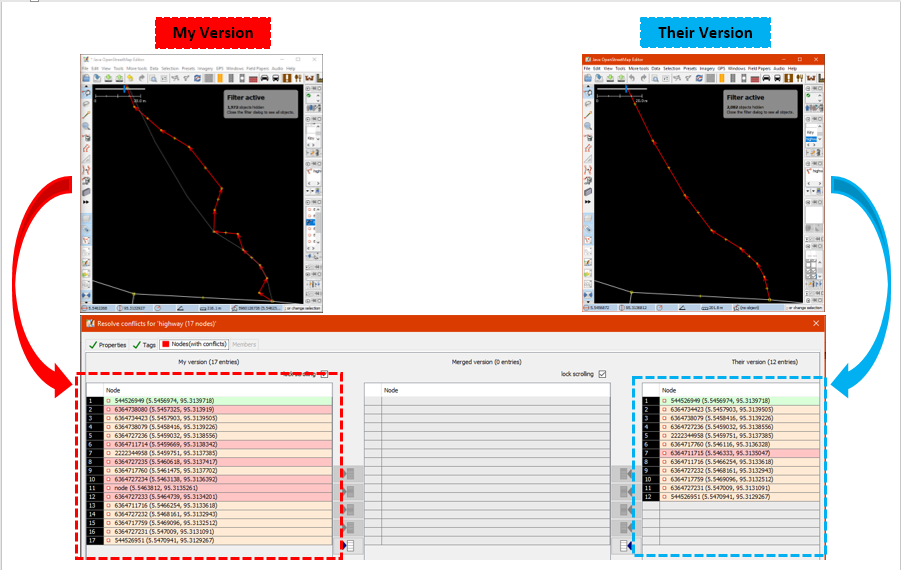 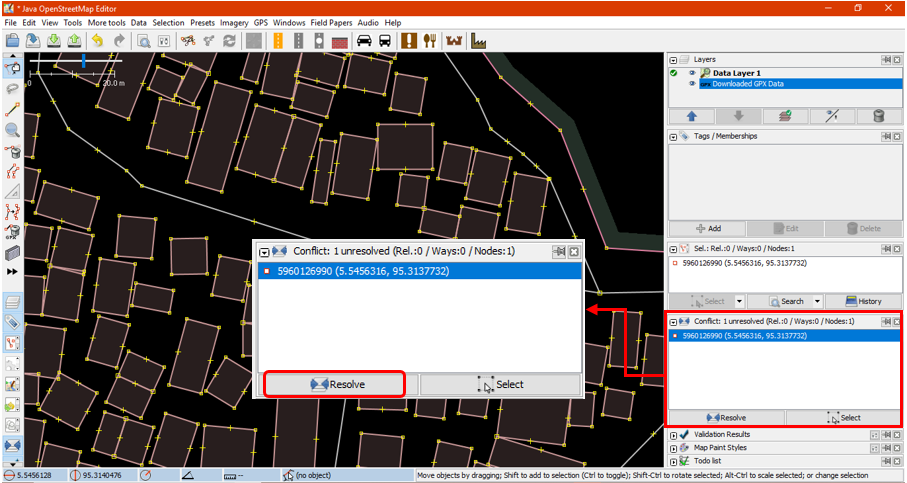 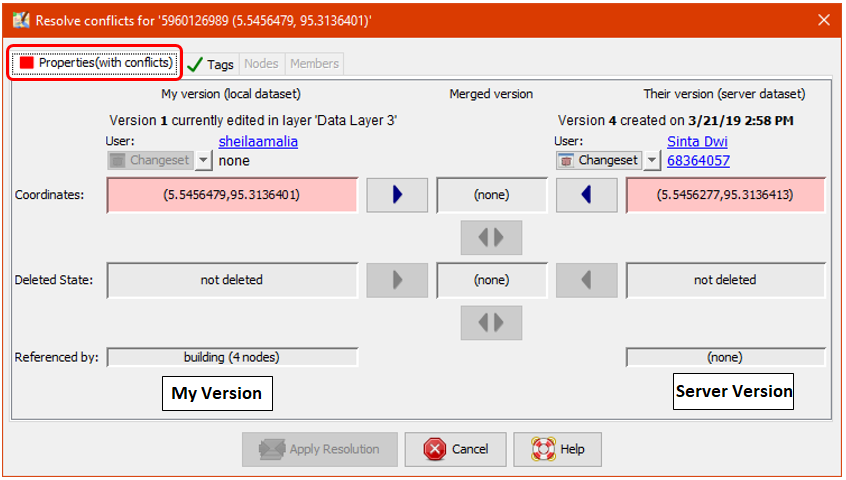 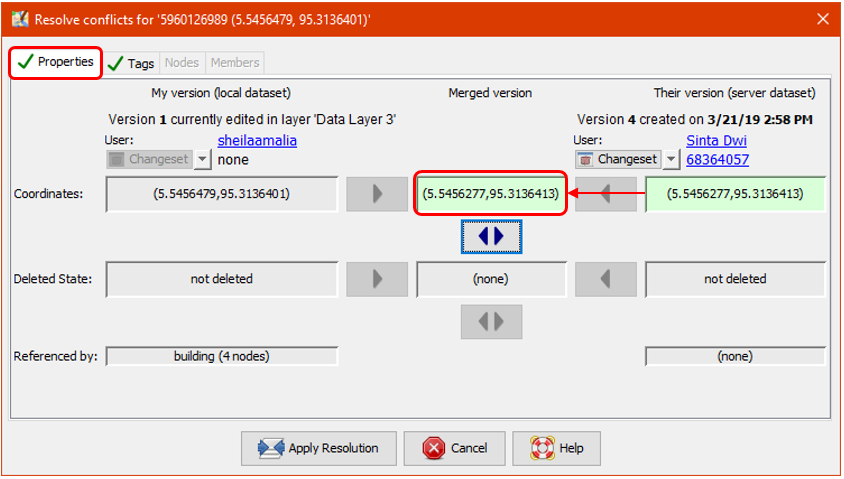 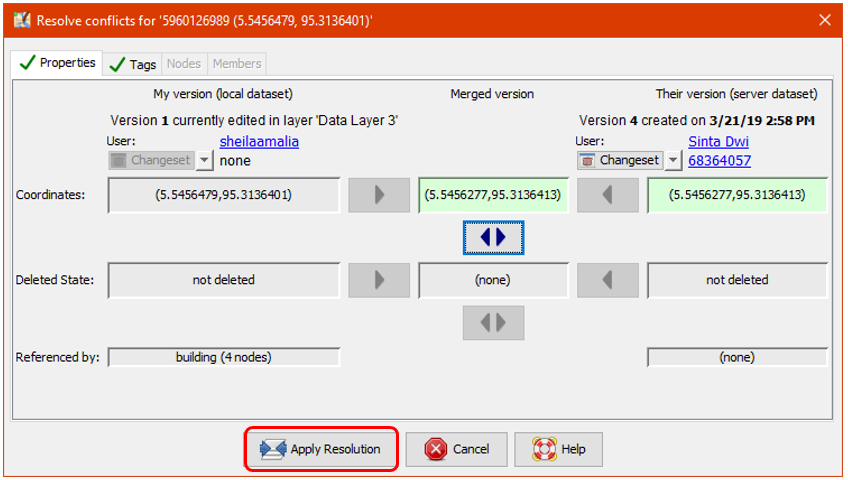 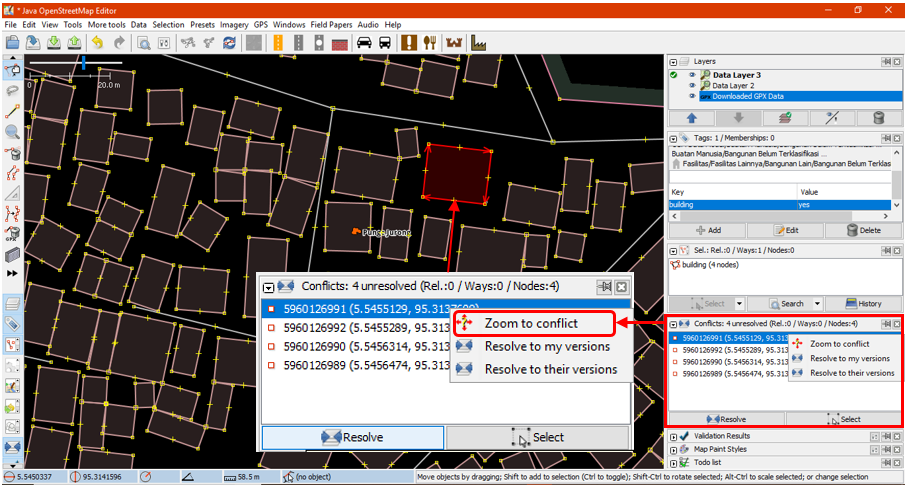 Note : You cannot upload changes until you have resolved all conflicts. Be careful when resolving the conflicts and check them one-by -one.

If you have followed all the steps in this chapter, you’ll have a good understanding of data conflicts in JOSM - congratulations!

Edit this page on Github